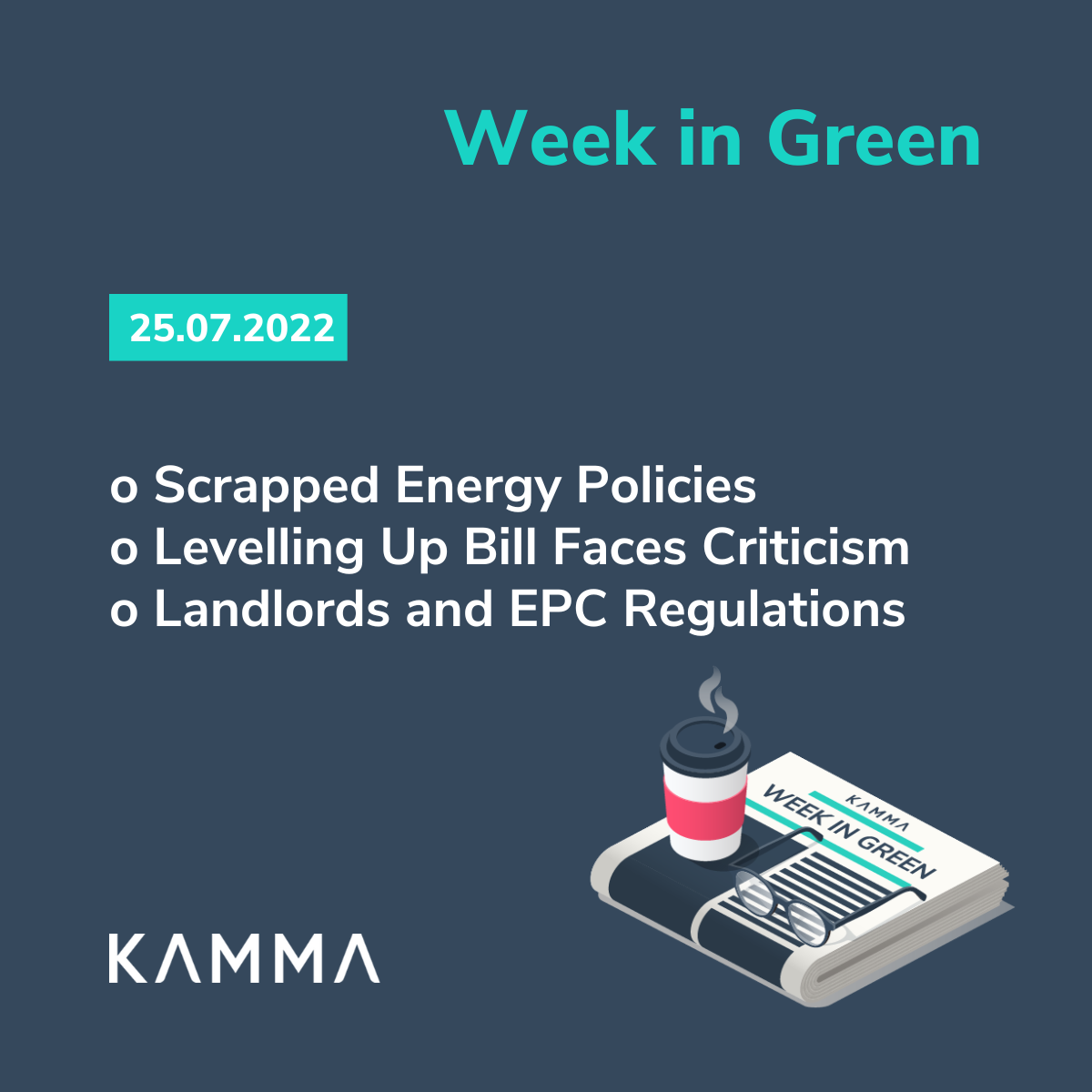 Every week Kamma team brings you a summary of the most interesting articles from the preceding seven days related to decarbonisation in the property sector and the progress towards Net Zero.

As a response to rising energy bills in 2013, then-PM David Cameron was quoted as saying to “get rid of the green crap”, which referred to spending cuts on energy efficiency policies that would now be saving homeowners money on energy bills. The analysis estimates that combined energy bills are now £2.5bn higher than they would be if those policy measures had stayed in place. For example, the rate of households acquiring loft and cavity wall insulation plummeted dramatically after 2013 as a result of the cuts, but if it had stayed the same most homes in the UK would now be insulated and saving on energy bills.

Will the situation change soon??

There is good and bad news. The bad, short-term news is that the rising wholesale price for gas will continue to push the energy cap up throughout the summer and into autumn, meaning higher energy prices on average per household. The good, long-term news is that contracts for difference (or CfDs – see our Week 1 article) backed projects will offset the increase in wholesale gas prices while it stays above a minimum threshold. Otherwise, homes can still do a lot to reduce energy bills by becoming more energy efficient in the first place. More emphasis will be put on household retrofitting to cope with energy market instability.

Kamma’s perspective: The sector has nearly ten years of catching up to do. Kamma is on a mission to ensure that improvements to energy efficiency have no more setbacks by providing the clearest data on how to retrofit homes to regulatory standards.

Critics of the new bill proposed by the Department of Levelling Up, Housing and Communities highlight emissions oversights.

On 18th July, an evidence session was held between MPs and real estate industry experts to discuss the recently passed Levelling Up and Regeneration Bill. Several concerns were raised about its ‘vague’ approach to the government’s net-zero targets. For example, the panel criticised the bill for overlooking the development of new housing and business premises that will fail to meet energy efficiency standards that are in line with net zero and thus will require extensive retrofitting work in the near future.

Why is retrofitting important?

The retrofitting sector is due to boom. Not only will the property sector be tasked with updating new buildings to meet energy efficiency requirements, but it will also need to work at a pace to update the UK’s existing housing stock, which is the oldest and thus most inefficient in Europe. After a week of blistering temperatures, UK residents have been battling the heat in poorly ventilated buildings. Conversely, cold winters paired with high fuel prices will impact these properties and its residents in an equally severe manner. Sadly, without retrofitting, lives are at risk.

Kamma’s perspective: Retrofitting is needed to meet net zero targets and save lives, particularly of the most vulnerable in society. Pressure is on the bill to respond to the sectoral and societal demand to prioritise retrofitting as a matter of public emergency. Kamma is prepared with new tools to drive finance towards retrofitting.

What is the background?

The article discusses new research from Paragon, a specialist mortgage lender, based on a landlords’ survey documenting their perspective of the new regulations. The analysis revealed a disparity between how much a property is likely to cost to meet new regulatory standards and what landlords are willing to spend. Funding options for the works varied between landlords, with the use of savings being the most common. Importantly, the new regulations have made landlords reconsider the purchase of new buy-to-let properties with an EPC rating below B and C.