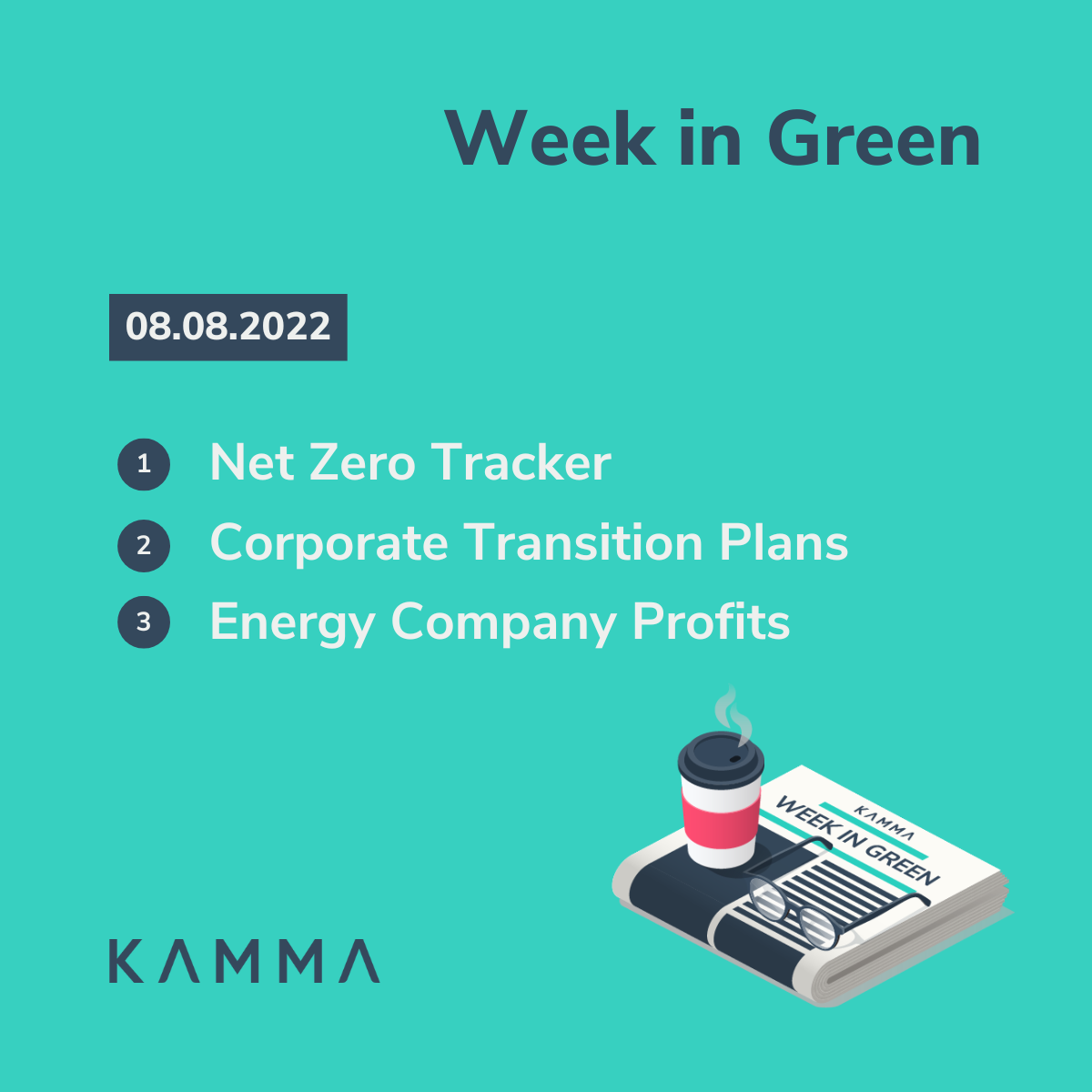 Every week the Kamma team collates the key headlines on the subject of Property Zero: the path to carbon neutrality for UK homes

Tell me about the report

Morgan Stanley Capital International (MSCI) has published the latest edition of its Net Zero Tracker report. Produced quarterly, the report indicates the progress (or lack thereof) of publicly listed companies towards Net Zero targets. It also celebrates companies with improved climate disclosures, as well as exposing those below standard. As another kick in the corporate backside, the Tracker also counts down the months that companies have left to exhaust their share of the global carbon budget for keeping global temperature rise below 1.5 degrees.

What are the key takeaways?

As highlighted in the article, the June edition made several statements on the need for the world’s largest companies to slash emissions. The headline statistic is that companies need to cut emissions intensity (that is, the volume of emissions per unit of GDP) by 8-10 per cent each year until 2050 to prevent warming above 1.5 degrees. Despite some progress on emissions reductions (we might have reached record high recorded emissions for the last time!), listed companies viewed as a monolith are on track to cause an average global temperature rise close to three degrees. Fewer than half of listed companies even have targets that align with a two-degree temperature rise, which is the cut-off point of the Paris Agreement before severe climate disruption.

Reports such as these create a more tangible benefit for better-performing businesses by validating their progress and increasing awareness of their achievements while also exposing slow progress.  However, scarcely mentioned in the MSCI report is the trajectory of decarbonisation in the property sector, which is the world’s largest asset class and must undergo one of the most radical accelerations we’ll see to meet emissions targets. As mentioned briefly in the report, under 5% of real estate has an implied temperature rise below 1.5 degrees; the rest is on track to continue emitting beyond its means. Kamma’s data supports those in the built environment with their Net Zero strategy. Get in touch to find out more.

The Transition Plan Taskforce (TPT) was launched earlier this year by HM Treasury to set standards for climate transition plans. The regime comprises policymakers, regulatory authorities, and representatives from the finance industry, all manoeuvring towards an as yet undefined gold standard of environmental performance. It has set two deadlines for listed companies and asset managers in the UK to publish Net Zero transition plans. The biggest fish will have until June 2023 to publish their plans. This includes listed companies and regulated investors with £50bn under management or that own at least £25bn. The slightly smaller fish, such as asset managers with portfolios under £5bn, will have an extra year.

The new deadlines take aim at the broad swath of industry that has been slow to form transition plans. One cause for complacency for companies has been the fear of exposure to scrutiny, criticism and, at worst, litigation. Meanwhile, less transparent companies are allowed to continue with business as usual. Making transition plans a legal requirement levels the playing field, encourages competition and forces the financial sector to raise standards. In doing so, the UK can begin to take another step towards its wish of becoming a world leader in green finance.

Where are we now?

The main question posed in the article is what exactly should the gold standard of transition planning mean in practice. Aim for solid gold and companies that are resistant to regulation may avoid listing in London. But aim for gold plated and risk hollow commitments, greenwashing, and a lack of progress during a crucial period. It is unclear how companies will respond.

Irrespective of the reporting measures, the market is putting pressure on companies to implement robust transition plans. We know this because our clients all say the same thing: move quickly or risk being left behind by the competition. Our one caveat is that any plan must be rigorous, with a clear set of steps to achieve the transition goals, however ambitious they may be. We’ve got the data and tools to deliver reporting that demystifies the process, in turn helping investors to identify the right companies to support on the road to Net Zero. See www.propertyzero.io for more.

BP’s underlying profits of £6.9bn between April and June of 2022 are its largest reported for the last 14 years. After a brief period in 2020 at the start of the pandemic when oil prices plummeted into negative figures, energy giants have been seeing profits steadily rise to new highs. The war in Ukraine has restricted Russian gas supplies to Europe, causing higher demand for alternative resources as the market scrambles to adapt to the change. Concurrently, high fuel prices mean that the average household is forecast to pay £3,600 per year on energy bills by the end of the year. Ultimately, the same high fuel prices emptying consumers’ wallets are filling those of the companies that sell it.

As the cost of living crisis intensifies, the pressure is on to find solutions. A windfall tax on energy companies to counteract rising energy bills was announced in May. However, as the forecasts worsen, more support for consumers is needed.

A higher windfall tax on profits of the oil and gas industry will provide immediate relief, particularly to the most vulnerable families. Still, it is foolish to assume that one-off tax packages are a long-term solution. The only guaranteed way to reduce vulnerability to high energy bills is to cut the demand for fuel in the first place. For homes, the most cost-effective way to do that is by retrofitting and a move towards cheaper, renewable sources that cost less and dramatically reduce emissions. A windfall tax would be a simple and fair start to the process of finding funding for those homes that need the most support.