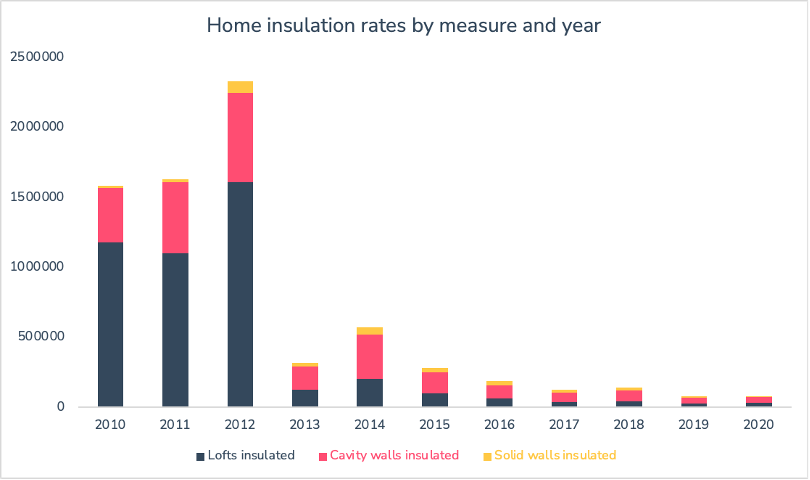 PRS left behind by lack of support on fuel poverty

The recent hike in energy prices and wider increases to the cost of living have dramatically outstripped rises in wages, leading to a huge rise in fuel poverty. Over 6.3 million households in the UK, may now have to choose between eating or heating their home. And, with ongoing global uncertainty making fossil fuels even more expensive, further price rises are expected in October 2022.

The government’s fuel poverty target is to ensure that as many fuel poor homes as is reasonably practicable achieve a minimum energy efficiency rating of Band C, by 2030. Yet there is still little to no financial support available for private landlords to implement energy efficiency upgrades – as a result progress has been unequal across housing sectors.

In the last 10 years, the social housing sector has more than halved fuel poverty, from 40.3% to 18.7%, whilst the Private Rented Sector (PRS), which supports more households, has reduced by only a third (36.7% to 25.0%). 2022 could see this return to 42%, meaning over 2.3 million households in the PRS are in fuel poverty. This is a greater number than the social housing sector (1.6 million) and yet less funding is available to support this group. The Social Housing Decarbonisation Fund is designed to deliver £3.8 billion in energy performance improvements over a 10-year period, targeted only at the social sector, whereas private landlords have been left behind.

What are the challenges for the private rented sector?

Underinvestment and policy cuts in the last 10 years has severely set back the PRS. “Cutting the green crap” in 2012 led to energy efficiency installations falling off a cliff after 2012. The £2 billion Green Homes Grant was beset by logistical challenges and was cancelled with no replacement in March 2021. The Energy Security Strategy, a signature policy designed to accelerate the transition away from fossil fuels, focuses almost entirely on supply side measures. The policies of the last decade have all ignored the single biggest opportunity to avert the impending fuel poverty crisis: delivering the best value energy efficiency improvements for the households that need them most across all sectors. To achieve the same results seen in the social sector, the government needs to introduce a Housing Decarbonisation Fund that’s available to all sectors and not just social housing.

The fragmentation of the PRS continues to be a major barrier to change in the sector. With over 2.65 million individual landlords, and around 7% of those being accidental landlords, the average landlord is responsible for just 2.1 properties. This delivers the twin challenges of both market regulation and operational capacity. It’s difficult for local authorities to regulate such a large group of individuals, and it’s hard for these same individuals to identify and make use of any available funding for improvements. A better solution is needed. Funding needs to be made more accessible, and easier to apply for, for private landlords to be able to fully utilise the support available.

The lack of progress seen in the PRS also comes down to a lack of financial motivation for private landlords who do not directly benefit from fuel cost savings. As a result, fuel poverty has remained high in the PRS. So, whilst there is some support available for landlords to carry out energy efficiency upgrades in the private rented sector, the difference seen between the social housing sector and the private sector in terms of fuel poverty indicates there’s a need for the government to rethink their strategy.

The government has consulted on plans to increase the Minimum Energy Efficiency ratings of private rentals from an Energy Efficiency Rating of E, to that of a C by the end of 2025. This would go a long way to reducing fuel bills and CO2 emissions for many private tenants, yet would lead to huge bills for landlords to pay. An average cost of £9,872 might be affordable for those with larger properties in the South East, where it will add little to existing mortgages. For those in areas with lower property values, however, this cost could mean a substantial number falling into negative equity and having to choose between increasing rents or going into arrears.

Identifying and targeting the ones most in need

The Energy Bills rebate is worth £9.1 billion and hopes to reduce the impact of the price rises on household energy bills this year by up to 50%. Such a broad response offers a small amount of support to almost everyone, ignoring those that need it most. Identifying those most in need, regardless of geographic location or housing sector, enables those most at risk of fuel poverty to be directly targeted. The £9.1 billion rebate that cuts bills for most of the country, could be better spent on improving the energy efficiency of those most at risk.

Analysis run by Kamma shows that this would prevent over three million of the poorest households from falling into fuel poverty, cutting the total in half. It would wipe over £2 million off this year’s energy bill, or £73 per household, and offer savings for years to come. In this way the government can extend their support and focus on the most vulnerable tenants across all housing sectors.

To conclude, the private sector is being under-supported compared to other sectors, and whilst regulation will force landlords to speed up progress in the PRS, it will lead to huge bills for landlords to pay. Instead, accessible funding is needed to support landlords to make energy efficiency upgrades to their properties and protect their tenants from failing into fuel poverty. Therefore, the £9.1 billion rebate that cuts bills for most of the country, could be better spent on improving the energy efficiency of those most at risk across all sectors.